[Mr. Burns] and Laddy got out and let down the special high tailgate which served as a platform for his speeches. Laddy sat on the edge of the tailgate and pounded his harmonica in his hand and began to play “The Star-Spangled Banner” as Mr. Burns unrolled the oilcloth backdrop on which was painted a crude map of the world in Mercator projection. The map did not detail all the small countries nor attempt to be up to date on the shifting national boundaries, but it successfully pictured the great divisions of culture, color, and speech in the world. Across the top and bottom of the map was printed in block letters:

Foucault is usually credited with minting the neologism ‘governmentality’. Certainly it was Foucault who first attached significant theoretical content to this somewhat awkward term. Yet it turns out the word has an interesting little history in its own right, which I briefly document in Governmentality (p.151). In an introduction to their recent collection of essays on governmentality, Ulrich Bröckling, Susanne Krasmann and Thomas Lemke remind us that some time before Foucault proposed it, Roland Barthes had used the word governmentality in his classic work Mythologies (1957). For Barthes, governmentality denoted the mechanism by which The Government comes to be perceived by its public as the author rather than the effect of social relations. As Bröckling et al note, Foucault would free the term from the ‘semiological context’ Barthes had given it, connecting it instead to the study of certain ‘forms of action and fields of practice aimed in a complex way at steering individuals and collectives’ [2].

But there exists a far more obscure and, to my knowledge, unnoticed use of this word, governmentality. The opening quote comes from a novel written by J.P. Miller (1919 – 2001). Miller was a well known American film and television drama writer who enjoyed considerable success. According to IMBd, amongst Miller’s best known works are the screenplay for Days of Wine and Roses (1962) (which starred a young Jack Lemmon alongside Lee Remick) and Helter Skelter, a made for TV movie about the killer Charles Manson. But it is in The Race for Home (1968), Miller’s first novel, that the word governmentality would perhaps be introduced to an American audience for the first time (translations of Mythologies notwithstanding). One of the chief protagonists in Miller’s novel is one Robert Burns, a character The New York Times would describe in its review as an ‘alcoholic exhorter’ and a ‘maniac’ who had invented his own philosophy. To quote the Times review, ‘”Governmentality,” Burns’s system, proposes mingling the races to create superpeople, and in Texas [where Burns preaches] them’s fightin’ words at every stop’ [3].

I read the Times review before I had seen the book. Intrigued, I bought a copy from an online secondhand dealer in the United States. But when the book finally arrived, and I ripped open the packing, it was not quite as I had imagined from the review.  ‘Sex: try to tell Laddy Buck’s story without it…,’ the back cover screamed. The Times had put Miller’s book in a league with Faulkner. But to my eyes, and judging it by its cover (I know – we’re not supposed to do that!), this was all about cheap sexual thrills and raunchy romance. Closer to a sexed-up Barbara Cartland, it seemed, than Faulkner!

One of the many things Foucault says of genealogy is that it reveals how ‘historical beginnings are lowly… derisive and ironic’ [4], that grand ideas and hallowed principles typically find their emergence in what Nietzsche called ‘ignoble’ circumstances. Now there is certainly not a direct line – not even a jagged one – that could be traced from Miller’s pulp fictional version of governmentality, to the one that Foucault would offer us in his lectures less than 10 years later. Even so, I think it is rather apt that one set of ‘origins’ for the word governmentality should be found in The Race for Home, a work of titillation and sexual misadventure that was perhaps more at home on the shelves of America’s supermarkets than those of its libraries. If the word governmentality has today quite a lot of academic prestige attached to it, one of the paths by which it entered the world was a bit more grubby and not at all dignified. The Race for Home – governmentality’s estranged cousin!

2. U. Bröckling, S. Krasmann and T. Lemke, ‘From Foucault’s Lectures at the Collège de France to Studies of Governmentality’, in their Governmentality: Current Issues and Future Challenges, New York: Routledge, 2011, p.1. 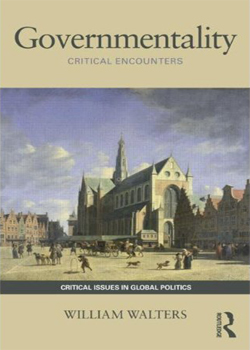